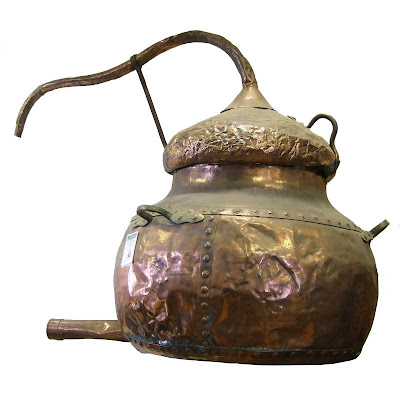 Written by and in collaboration with Jamie Baxter. Jamie was a master distiller at Chase Distillery where he was responsible for designing, installing, commissioning, running and then developing products. He now works as a consultant, working around the UK and South America aiding in start up small scale artisan distilleries.

We are in the middle of a particularly English revolution. It’s very small, and rather quiet, but believe me, it is happening. Companies like Chase, English Whisky Co and Sipsmith led the way. Others such as Sacred, Adnams, Charles Martell and Ludlow have followed and there are others coming over the hill. I am talking about a wave of smaller-scale, artisan distilleries all pushing to see what has happened in America also happen over here. It’s almost the reverse of what happened with beer where the American craft brewers followed the rise of British micro-breweries.

I have been fortunate enough to be involved with several new distillery projects to a greater or lesser degree. Although there is huge variety in the products proposed, all these projects have a traditional pot still at the heart of them. The design involves a little thought:

It is best to buy the biggest pot that can be afforded and that will fit in the space available. Oddly a 450 litre still does not cost much more than a 300 litre one, and the extra capacity will always be useful. That said, all the other ancillary equipment will need to be scaled up accordingly. Similarly, it is important to consider the work patterns. With a small still, many runs can be made in one day, but a lot of time is spent waiting for the still to warm up each time and energy costs are higher. A bigger pot means that fewer runs are required. However, there comes a point where the entire run cannot be done in a single shift.

Traditionally copper was used because it has good heat transfer properties, but we now know that it also acts as a catalyst to certain reactions so removing sulphates and giving a smoother spirit. Stainless steel is cheaper and easier to maintain, and there are wooden ones still knocking around (El Dorado anyone?). Even glass is used, particularly for gin where neutral alcohol is usually bought in. But for the artisan distiller the only way is copper.

You will have seen the wonderful whisky stills with their tall, conical tops, and maybe an Armagnac still with an olive shaped contraption mounted on the pot. Others of you will have seen a column with several bubble plates. These are all different methods for increasing the amount of condensation of the alcohol vapour and is called reflux. Put simply, the more reflux, the purer, stronger and smoother the spirit becomes. A huge amount of reflux is needed to get the spirit to 96% ABV (the EU required purity for vodka production) and less is needed for spirits such as whisky, rum, brandies etc which will subsequently be barrel-aged to smooth the spirit out. Designing the amount of reflux is very much about getting a balance between purity and flavour. 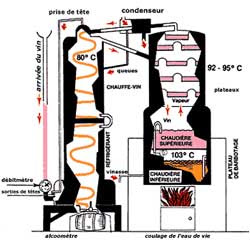 This is dictated by the location. Mains gas is cheapest, but if you’re not on the mains then oil or LPG is a good alternative. Charles Martell uses a wood-fired boiler for his Stinking Bishop cheese plant, so it was a natural choice to design a wood-fired still as he has all the equipment needed to handle 20 tonne deliveries of logs. Electrically heating a still is perhaps easiest in a small space, but is expensive to run.

Most stills nowadays are heated indirectly using steam raised using one of the fuels above. The simplest and cheapest method of transferring this heat into the still is to run the steam through a coil in the belly of the pot. An alternative method is to run the steam into a jacket surrounding the bottom part of the pot. Although this is more expensive to make, it has the advantage that because it has a bigger surface area, and because it gives a smoother interior to the pot, particulate material can be put in the still without the risk of burning eg cider brandy (when the pot is filled with cider) can be heated easily with a steam coil, but if apple brandy is to be distilled (where the whole fermented mash including the apple bits go in the pot) then a jacket is better because lower steam pressure (and therefore temperature) can be used so reducing the risk of particulate material burning, and it is easier to clean without a coil getting in the way.

Direct heat, whereby naked flames heat the bottom of the pot, is still used by Glenfiddich and Glenfarclas in Scotland. Nolet, home of Ketel One, do the same as do many grappa, rum and cognac distillers. I must admit that naked flames in an area where highly flammable vapour might be around gives me the heebie-geebies. 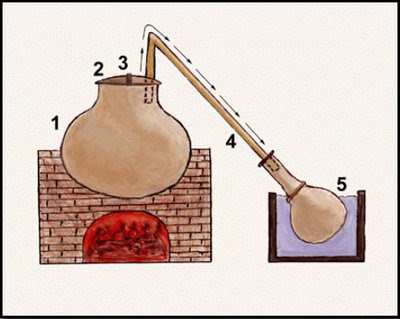 This is the term for what the still is filled with initially. It might be thin and with few particles like cider, wine or beer, or it might be thick and gloopy or full of chunks of fermented fruit and vegetables. The former is easy to handle, the latter needs a bit of care. Perhaps a stirrer or rummager might need to be built in. Certainly a larger outlet will be required to empty it. Flavoured spirits might require easy access into the pot to put in and remove sprigs of wormwood (mmm… absinthe), orange peel, and other larger flavouring material.

One of the biggest problems faced by many distilleries is what to do with the stillage. This is what is left in the still after the alcohol has been distilled off. Depending on the spirit being produced, this might be fed to animals or sprayed on fields as irrigation where there is not much nutritional content left. Whichever way the distiller gets rid of waste, he needs to ensure that that it is done with all the appropriate licences and permissions, and that it is done at no cost.

I find all stills fascinating, and most of them beautiful. The artisan distiller should remember that tourism offers a good additional revenue stream. Over 1.3 million people visited Scottish distilleries last year spending nearly £18 each. Tap into that market. Even if you cannot receive visitors, make the distillery look nice and it will give you a nice warm feeling every morning. 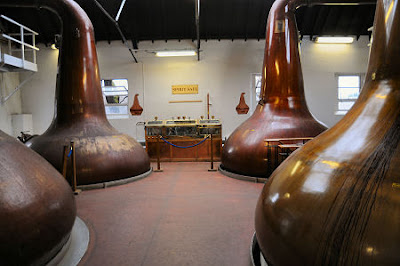 Every business plan shows that the distillery will be a success, otherwise the project will not get off the ground, so plan for success and make sure that you can expand. Similarly, every business plan is wrong. Things happen and so it is wise to build in as much flexibility as possible. The artisan distiller may set out to make vodka from parsnips, but find a big demand for cherry brandy after a glut in the orchard.

Of-course the list above is not exhaustive, and there is far more to consider than just the still. The growing of the ingredients is becoming more common with distilling often being considered as a farm diversification. Mashing, fermentation, blending, storage, ageing, bottling and distribution all need equally careful thought, and in particular the choice of site is critical, but it’s really, really good fun